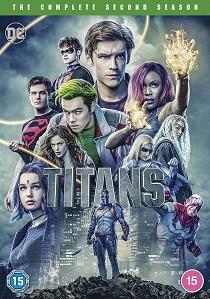 Following the aftermath of an encounter with Trigon, Dick Grayson reforms the Titans. Under his supervision in their home at Titans Tower, Rachel Roth/Raven, Gar Logan/Beast Boy and Jason Todd/Robin train together to hone their abilities and teamwork skills. They're joined by Hank Hall/Hawk, Dawn Granger/Dove and Donna Troy/Wonder Girl, who have attempted to transition into regular lives.

But when old enemies resurface, everyone must come together to take care of unfinished business. As this family of old and new Titans - including Conner Kent/Superboy and Rose Wilson/Ravager - learns to coexist, the arrival of Slade Wilson/Deathstroke brings to light the sins of the past, threatening to tear apart the Titans family once more.