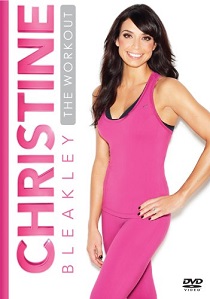 NewsTV Series
News Article Go back to homepage
2entertain is proud to introduce a brand new face to fitness, Christine Bleakley, in her first ever fitness DVD, Christine Bleakley - The Workout, available to own from 26th December 2011.
Christine Bleakley
2entertain
Unknown
26/12/2011
Thank you for supporting DVD365.net when you order using the link(s) below. As an Amazon Associate we earn from qualifying purchases
Buy DVD
Information

Christine has always been active, well-known as a keen runner, waltzing her way across the dance floor in Strictly Come Dancing and facing sub-zero temperatures in aid of Sport Relief where she water-skied across the English Channel (raising well over a million pounds in the process).

This DVD is a mix of brand new techniques for toning up, slimming down and getting fit; Christine Bleakley - The Workout includes a fantastic range of routines that you'll really enjoy and music which is great to work out to.

Much of Christine's inspiration was her sister Nicola who, after reaching a UK size 24 at 18 years-old, lost an incredible 7 stone and maintained her new current weight through regular exercise. Christine wanted to create a versatile programme for women that could help them keep the weight off with exercises that offer something new and challenging, as well as pushing the most regular gym-goer. With this in mind, Christine approached acclaimed personal trainer Maria Fenn to come up with the perfect workout and her sister Nicola to share her personal experiences on weight loss and fitness, as well as join her on set to demonstrate all the routines.

Presented by Christine and joined throughout by trainer Maria and sister Nicola, the DVD is designed to build up your fitness level, sculpt your body and help you lose weight by using revolutionary techniques such as plyometrics and interval training, two incredibly effective ways to work out and deliver quick results. Divided into two sections, with the first focusing on your legs and bum, arms and core muscles and the second with more hardcore routines - you can either do the whole DVD or just dip in and create your own programme.

Highlights include the Bleakley Blaster (you'll see why it's been named that pretty quickly), an advanced training session which gives you a whole body workout, perfect for those who have little time to train. Or the Kick Butt Interval Training workout, one of the most effective fat burning training methods, boosting your metabolism so much that you're incredibly still burning calories for up to two days after you've exercised.

So whatever your fitness need, Christine Bleakley - The Workout will help you achieve that all over toned body you've always wanted.

Christine added: "Training for Sport Relief was the thing that really awakened me to some of the science of exercise, introducing me to some pretty hard-core interval training which helped me become lean and strong. This and my sister Nicola's personal experience have made me realise how much of a difference the type of exercise you do will make to your physique and I really hope everyone enjoys going through this programme with us. I can tell you it isn't easy, but Maria, Nicola and I had real fun doing it and I hope everyone has the same fun at home. between groans of utter exhaustion obviously".

Christine Bleakley is one of the most popular faces on British television. In June 2010 Christine signed to ITV to continue her successful on-screen relationship with Adrian Chiles on the new, revamped breakfast show Daybreak and was crowned Ultimate TV Presenter at the Cosmopolitan Women Of The Year awards. In May 2011 Christine hosted The National Movie Awards live on ITV1 and she has also recently fronted two one-off specials featuring exclusive performances by some of Britain's best loved bands in Duran Duran: One Night Only and Simply Red: One Night Only (both ITV1).

Christine presented The One Show (BBC One) for 3 years until June 2010 with Adrian Chiles, reaching highs of 7 million viewers, as well as appearing on Strictly Come Dancing (BBC One) and as part of Sport Relief where she famously water-skied across the English Channel in March 2010.

Christine began her TV career in Northern Ireland on shows such as Let Me Entertain You and First Stop for BBC Northern Ireland, as well as presenting Sky High (BBC Two NI, 2004), where she flew around the country in a helicopter. She has appeared on Would I Lie To You? (BBC One), Shooting Stars (BBC Two), Chris Moyles Quiz Night (Channel 4) and Channel 4's Comedy Gala at the O2 Arena. In January 2009 Christine visited Uganda for a series of short films for Comic Relief.