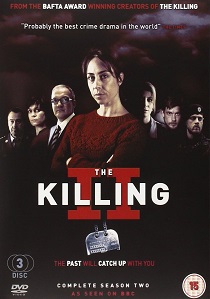 Following on from the BAFTA award-winning The Killing, staring Sofie Gråbøl, Nicolas Bro and Charlotte Guldberg, The Killing - Series 2 is released on DVD by Entertainment One and Arrow on 12th December 2011.

It's been two years since detective Sarah Lund (Sofie Gråbøl) was stripped of her investigative role and transferred to a low-key job in the country; but when the body of a female lawyer is found murdered in macabre and puzzling circumstances, Lund's former boss Lennart Brix calls her back to assist with the investigation. Initially reluctant, Lund soon changes her mind as she becomes engrossed with the case.

As the police grapple with what few clues they possess, newly appointed Minister for Justice Thomas Buch (Nicolas Bro) strives to oversee some intricate political negotiations between parliamentary parties over the introduction of a series of controversial new anti-terrorism laws. Meanwhile, army Captain Jens Raben awaits release from the psychiatric ward after a nervous breakdown following his deployment.

Over the course of 10 gripping episodes, the worlds of crime, politics and the military become increasingly intertwined and as the case progresses, Lund's mission becomes a race against time to find the culprit and prevent further killings...

DVD
The BAFTA-winning hit Unforgotten, released on DVD 26th April 2021 from BBC Worldwide, returns for a fourth series, as Cassie and Sunny investigate a cold case with alarming links to the police force. END_OF_DOCUMENT_TOKEN_TO_BE_REPLACED
Top PicksView