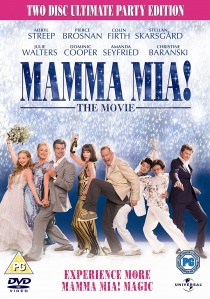 News Article Go back to homepage
If you were on another planet, then that is the only reason you will have not heard of or seen the biggest film sensation of 2008 - Mamma Mia! - The Movie. And now, on now the 23rd November 2009 from Universal Pictures, its back for a two-disc special edition packed with loads of fabulous new extras!
Heather Emmanuel, Colin Firth, Nancy Baldwin, Pierce Brosnan, Stellan Skarsgãrd, Amanda Seyfried
Phyllida Lloyd
Tom Hanks, Gary Goetzman, Judy Craymer, Benny Andersson
Universal Pictures (UK)
1 hour 48 minutes
23/11/2009
Buy DVD
Information

If you were on another planet, or living as a hermit on a remote island, then that is the only reason you will have not heard of or seen the biggest film sensation of 2008 - Mamma Mia! - The Movie. And now, on now the 23rd November 2009 from Universal Pictures, its back in 2009 for a two-disc special edition packed with loads of fabulous new extras!

Whether you're giving or receiving, make sure you have the most gorgeous present under your tree this Christmas, as now the Mamma Mia! - The Movie DVD is even more spangly and more sparkly with new packaging that will have you itching to get the film straight on and get dancing. Packed with fantastic new extras, whether you're a first time viewer or a Mamma Mia! - The Movie Aficionado, there is something for everyone.

The DVD extras include; 'Mamma Mia - Stage to Screen' an insightful documentary following the success of the stage show musical through to the smash hit film, a look at the star studded UK film premier with 'Mamma Mia! - Meeting the Stars - Premier Spectacular', the hilarious 30 Rock Episode 'Mamma Mia' showing Jack Donaghy doing a 'Mamma Mia' to trace his real dad, and 'The Best Summer of My Life' a selection of cast member interviews sharing their wonderful experiences making one of the biggest movies of all time.

Also, what better way to invigorate your in-laws after a festive feast but with a good old singsong? You can enjoy the film and also don't miss a word as you watch and sing a long with the lyrics appearing on the bottom of the screen, sure to get even the most ardent stick in the mud toe tapping and singing along. This is the ultimate must own DVD for any discerning Mamma Mia! - The Movie fan and the perfect DVD to brighten up your family Christmas.

If the name of the game for your family is fun, laughter, a good old sing song (and maybe even a bit of dancing) you better make sure you're shouting gimme, gimme, gimme. Just don't forget to say thank you for the music when writing your Christmas letters. From West End smash to global phenomenon, Mamma Mia! has already been seen by over 40 million people in over 200 major cities across North American, Australia, Europe and Asia since opening over a decade ago in London's West End. The three women who created the worldwide smash stage hit - global producer Judy Craymer, writer Catherine Johnson and director Phyllida Lloyd - repeated their roles in bringing this joyful, musical story to the big screen.

Mamma Mia! - The Movie is inspired by the story telling magic of some of ABBA's biggest hits and is a celebration of mothers and daughters, old friends and new family found. Make sure you send out an S.O.S this Christmas and fulfil your Dancing Queen potential.