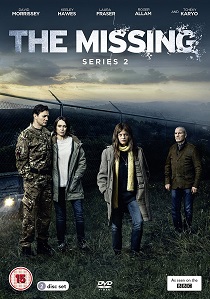 Following the huge success of BBC drama The Missing, the hard-hitting series returns with a brand new case and a new all-star cast including Keeley Hawes (Line of Duty) and David Morrissey (The Walking Dead), as the parents of a missing child, and Tchéky Karyo (The Patriot), reprises his role as tenacious missing persons detective Julien Baptiste. The Missing: Series Two is set to arrive on DVD and Blu-ray on 26th December 2016 courtesy of RLJ Entertainment's Acorn Label, following its run on BBC One.

The year is 2014 and a young British woman stumbles through the streets of a small town in Germany and collapses. Her name is Alice Webster (Abigail Hardingham - Nina Forever), and she went missing from the very same town, of Eckhausen, 11 years ago. Her return sends shockwaves through the small community, especially when it is revealed that she may hold vital clues to the whereabouts of another missing girl.

Told simultaneously over two timeframes, the series follows Alice's family as they are thrown back into a turmoil that threatens to tear them apart at the seams. French detective, Julien Baptiste becomes embroiled in the mystery as he races across Europe to pursue a 12-year-old case that he never let die.

Through a gripping puzzle of twists and turns, The Missing: Series Two explores the emotional complexity of what happens when a missing child returns, as well as tracing a thrilling chase for a missing girl who is yet to be found.