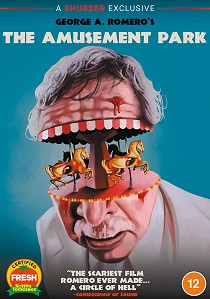 From the master of horror himself George A. Romero, comes his long-lost masterpiece... the critically acclaimed and truly terrifying thrill-ride The Amusement Park.

Discovered and restored some 46 years after its completion this haunting tour-de-force from the maestro who brought us seminal greats Night Of The Living Dead, Dawn Of The Dead and Day Of The Dead, to name a few, was finally released in cinemas in 2019 and now this Shudder Exclusive gets its UK Blu-ray, DVD and digital release this Autumn.

The film, which has been certified fresh on Rotten Tomatoes, makes its home entertainment bow on 17th October 2022 from Acorn Media International and comes complete with stunning artwork and a host of brand-new special features. These include audio commentary with Michael Gornick, separate interviews with Suzanne Desrocher-Romero, Bonnie Hinzman and Ryan Carr and a fascinating panel interview. There's also the official brochure, the script and behind-the-scenes photos, please see full list below, making this Shudder Exclusive the must-have release this Halloween.

An elderly man (Lincoln Maazel - Martin) goes for what he assumes will be an ordinary day at the amusement park, only to find himself in the middle of a hellish nightmare. Amid the rollercoasters and chaotic crowds, he becomes increasingly disoriented and isolated; as the pain, tragedies and humiliations of ageing in America are played out before him...

Perhaps Romero's wildest and most imaginative creation - an alarming and absurd allegory about the nightmares of growing older The Amusement Park provides a fascinating insight into the legendary filmmakers early artistic vision and is not to be missed.

Related Articles
Night Of The Living Dead: The Criterion Collection, Creepshow, Knightriders, Season Of The Witch, George A. Romero's Diary Of The Dead, The Dark Half, Dawn Of The Dead: Limited Edition
For your consideration 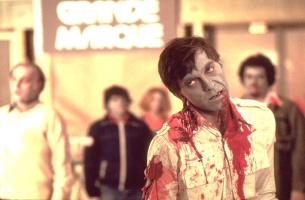 Dawn Of The Dead: Limited Edition

HotBDUHD
Fans, aficionados and collectors are in for a treat as horror maestro George A. Romero's long-awaited, highly anticipated Dawn of the Dead, finally gets the home entertainment release it deserves from Second Sight Films on 16th November 2020. END_OF_DOCUMENT_TOKEN_TO_BE_REPLACED
Comments
Hot Pick

HotDVDBDTV
DCI Tom Brannick returns, as the murder of a crooked accountant unravels a trail of greed that threatens to expose the true identity of the legendary assassin, codenamed, Goliath in Bloodlands: Series 2 released on DVD and Blu-ray 14th November 2022 from Dazzler Media. END_OF_DOCUMENT_TOKEN_TO_BE_REPLACED
Top PicksView