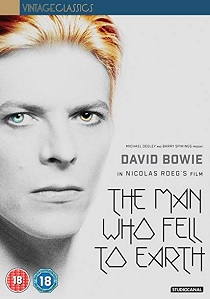 To mark the 40th anniversary of the UK release of director Nicolas Roeg's iconic science fiction odyssey, The Man Who Fell to Earth, a new 4k restoration of the cult classic is being released by StudioCanal on 24th October 2016. The restoration has been in the works since late 2015, but is now especially timely and poignant given the news of David Bowie's death earlier this year.

The film will be released on DVD, Blu-Ray and as a Collector's Edition on 24th October 2016, complete with brand new bonus material and special packaging, as part of the Vintage Classics range.

Restored by Deluxe London, the restoration of The Man Who Fell to Earth is based on a 4K scan of the original camera negative, followed by a full 4K workflow, with the approval of Nic Roeg and the assistance of cinematographer Anthony Richmond ASC, BSC who was closely involved in the new grade. Richmond says: "I had been disappointed with previous editions of the film for which I hadn't been involved in the grading process. The colourist Steve Bearman and I have brought the new 4k restoration in line with the original film print. I felt that certain scenes were lacking that look and feel. Probably the biggest change is early in the film where David Bowie is sitting by the riverbank drinking water and looking at the rings. We warmed it up and made it match the print. I also felt the interiors all had a little too much Magenta in them so we took that out. The other changes were very subtle."

Featuring a startling and era defining lead performance from David Bowie (The Prestige, Labyrinth) in his debut feature role and based on the cult novel by Walter Tevis, The Man Who Fell to Earth endures as, not only a bitingly caustic indictment of the modern world but, also, a poignant commentary on the loneliness of the outsider.