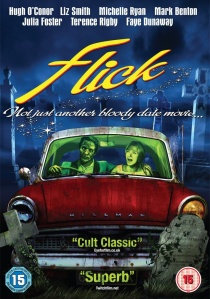 Back in 1960 when rock 'n' roll was king, shy and stuttering teddy boy Johnny Flick' Taylor (Hugh O'Conor) wanted one thing  to dance with Sally Martin (Julia Foster), the girl of his dreams. However, Johnny's dream turns into a nightmare when he is bullied and beaten on the dance floor by Sally's boyfriend Creeper and in the mayhem that follows he then finds himself at the centre of a murder. Panicking, he flees the scene of the massacre but his car veers off the road and into the river, sending Johnny to a watery grave.

Forty years later, a mysterious pirate radio station playing the sounds of the Fifties awakens Johnny from the dead and as he drives through the night in his spectral motorcar, he realises he is now a monster in search of lost emotions. To him the modern world looks just as it did in the 1950s and he soon finds himself returning to the only place he ever called home  his mother's flat. Time has stood still for his Ma (Liz Smith). She never believed Johnny was dead and has lived trapped in time, waiting for him to come home.

With him now finally back she tries to look after him, cook his favourite food and iron his shirts but all Johnny does is sleep except between the hours of 12 midnight and 2.00am when Radio Rockabilly plays the sounds of the Fifties. Re-animated by the music, he prowls the streets searching for Sally and looking to avenge her death. Following a series of mysterious murders, one armed Memphis cop Lt Annie McKenzie (Faye Dunaway) is drafted in to investigate and she soon realises that although they say rock 'n' roll is dead, Johnny's back and very much alive and killing!!