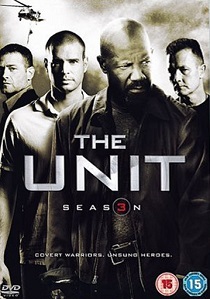 Back with a bang The Unit: Season Three box-set DVD is released on 20th October 2008, from Twentieth Century Fox Home Entertainment. The US hit show follows the men at the core of a top-secret military world of conspiracy, terrorism and suspense named The Unit.

In the latest season the team return home from a successful mission, though it is not long before they are catapulted into the firing line once again. The Unit is on official stand-down from duty. Accusations of criminal activity land upon leader Jonas Blane (Dennis Haysbert) and his men. Is this a witch-hunt, or have shady happenings been flying under the radar?

No one is immune to suspicion and now the skills and training learnt at the military are the only weapons to protect themselves and their families. It is a deadly race of survival to uncover who is behind these attacks on The Unit. Whether on the front line or back at home, these men and women are locked into The Unit.

The box set contains all 11 episodes over three packed DVDs with deleted scenes, a making of featurette and director's commentary. It's a full-throttle, adrenaline pumping drama for all fans of first rate US TV shows!