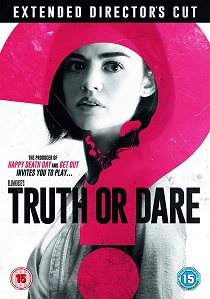 Blumhouse returns with another edge-of-your-seat horror movie with Truth Or Dare, released on DVD and Blu-ray 20th August 2018 from Universal Pictures (UK).

When a group of friends set out to enjoy their final spring break together, a harmless game of "Truth or Dare" turns deadly when someone or something begins to punish those who tell a lie or refuse the dare.

Lucy Hale (Pretty Little Liars) and Tyler Posey (Teen Wolf) lead the cast of friends who work together to try and end the terrifying game that follows them home in Truth Or Dare.

Produced by Jason Blum (Get Out, Split) and directed and executive produced by Jeff Wadlow (Kick-Ass 2) the horror-thriller follows co-stars Violett Beane (The Flash), Nolan Gerard Funk (Counterpart), Hayden Szeto (The Edge of Seventeen) and Sophia Taylor Ali (Famous in Love) as they all have their turn in choosing Truth or Dare?

DVD
In The Undoing, released on DVD and Blu-ray 22nd March 2021 from Warner Home Video, a chasm opens up in the seemingly perfect life of a successful therapist: a violent death, a missing spouse, and a ... END_OF_DOCUMENT_TOKEN_TO_BE_REPLACED
Hot PicksView