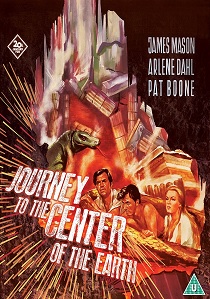 Journey To The Center Of The Earth: Eureka Classics (1959)

Jules Verne's classic novel, Journey to the Center of the Earth, is brought to the screen in this thrilling adventure about a band of intrepid explorers descending to the hidden reaches of our world.

Professor Lindenbrook (James Mason; 20,000 Leagues Under the Sea, North by Northwest) discovers a long hidden message that reveals the existence of a passage into the centre of the Earth. Leading a team of unlikely adventurers (including Pat Boone, Arlene Dahl, and... a duck), the groups daring expedition will see them come up against exploding volcanoes, rockslides and even flesh-eating reptiles!

Scored by the legendary Bernard Hermann and filmed in stunning Cinemascope, Journey to the Center of the Earth is a much beloved classic, and a landmark in both Science-Fiction and Adventure filmmaking. Eureka Classics is proud to present the film for the first time on Blu-ray in the UK, from a stunning 4K restoration.

Journey to the Center of the Earth is released on Blu-ray 18th September 2017.

DVD
In The Undoing, released on DVD and Blu-ray 22nd March 2021 from Warner Home Video, a chasm opens up in the seemingly perfect life of a successful therapist: a violent death, a missing spouse, and a ... END_OF_DOCUMENT_TOKEN_TO_BE_REPLACED
Hot PicksView