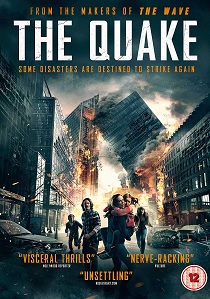 NewsActionAdventureWorld Cinema
News Article Go back to homepage
In 1904 an earthquake shook Oslo. Its epicenter was in the Oslo Rift, which runs directly through the Norwegian capital. What if a massive earthquake is looming? The Quake is released on DVD 20th May 2019 from Signature Entertainment.
Kristoffer Joner, Ane Dahl Torp, Edith Haagenrud-Sande, Kathrine Thorborg Johansen, Jonas Hoff Oftebro
John Andreas Andersen
Are Heidenstrom, Martin Sundland
Signature Entertainment
1 hour 46 minutes
20/05/2019
#TheQuake
Thank you for supporting DVD365.net when you order using the link(s) below. As an Amazon Associate we earn from qualifying purchases
Buy DVD
Information

In 2015, The Wave showed that Scandinavia could actually give Hollywood competition in a segment they've had monopoly and been supreme on; the so-called "High Concept" movie. And at the same time also add a bit of Scandinavian flair to it. Now, they're back with another rollercoaster ride in The Quake, released on DVD 20th May 2019 from Signature Entertainment.

In 1904 an earthquake with a 5.4 magnitude on the Richter scale shook Oslo. Its epicenter was in the Oslo Rift, which runs directly through the Norwegian capital. There are recorded quakes from the rift on a daily basis and geologists cannot be sure, but arguments indicate that we can expect major future earthquakes in this area. When - nobody can say for certain - but we know that the density of people and infrastructure in Oslo is significantly more vulnerable today than in 1904.

What if a massive earthquake is looming?