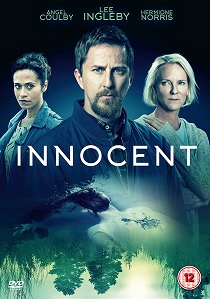 NewsTV SeriesDramaCrime
News Article Go back to homepage
Brimming with suspicion, secrets and lies, Innocent, released on DVD 21st May 2018 from Acorn Media International, is an enthralling new thriller starring about a man trying to put his shattered life back together following his release from prison, after serving time for his wife's murder.
Lee Ingleby, Hermione Norris, Angel Coulby, Adrian Rawlins, Daniel Ryan
Richard Clark
Acorn Media UK
3 hours 6 minutes
21/05/2018
#Innocent
Thank you for supporting DVD365.net when you order using the link(s) below. As an Amazon Associate we earn from qualifying purchases
Buy DVD
Information

Brimming with suspicion, secrets and lies, Innocent is an enthralling new thriller starring Line of Duty's Lee Ingleby as a man trying to put his shattered life back together following his release from prison, after serving time for his wife's murder. This four-part thriller is set to arrive on DVD courtesy of Acorn Media International, following its run on ITV in May.

Written by Matthew Arlidge (Silent Witness) and Chris Lang (Dark Heart) and starring a stellar cast including Cold Feet's Hermione Norris (In The Club), Angel Coulby (The Tunnel), Daniel Ryan (Mount Pleasant) and Adrian Rawlins (Girlfriends), this gripping series is set for its DVD release on 21st May 2018.

After seven years in a high security prison, David Collins' (Ingleby - The A Word), conviction for the murder of his wife, Tara, is overturned due to a technicality, or as his lawyer puts it "an appalling miscarriage of justice". Able to start his life again and begin to rebuild relationships with his family and friends, David vows to regain custody of his children and bring the guilty to justice.

As a new investigation is launched, headed by DI Cathy Hudson (Coulby), dark secrets of abuse, affairs and money troubles rise to the surface. From jealous sisters to disgruntled lovers, these secrets rip fragile relationships apart at the seams. But one question remains: is David Collins truly innocent?

Innocent is an engrossing drama that will have you on the edge of your seat from start to finish.

HotDVDBDTV
DCI Tom Brannick returns, as the murder of a crooked accountant unravels a trail of greed that threatens to expose the true identity of the legendary assassin, codenamed, Goliath in Bloodlands: Series 2 released on DVD and Blu-ray 14th November 2022 from Dazzler Media. END_OF_DOCUMENT_TOKEN_TO_BE_REPLACED
Top PicksView