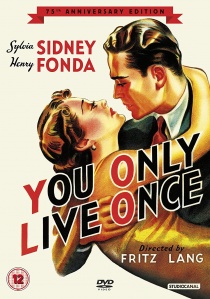 News
News Article Go back to homepage
Based on a story by Gene Towne and Graham Baker, directed by Fritz Lang and starring Henry Fonda and Sylvia Sidney, You Only Live Once: 75th Anniversary is Out To Own On DVD on 4th June 2012 from StudioCanal.
Jerome Cowan, William Gargan, Jean Dixon, Barton MacLane, Henry Fonda, Sylvia Sidney
Fritz Lang
Walter Wanger
StudioCanal
1 hour 26 minutes
04/06/2012
Thank you for supporting DVD365.net when you order using the link(s) below. As an Amazon Associate we earn from qualifying purchases
Buy DVD
Information

Based on a story by Gene Towne and Graham Baker, directed by Fritz Lang and starring Henry Fonda and Sylvia Sidney, You Only Live Once: 75th Anniversary is Out To Own On DVD on 4th June 2012 from StudioCanal.

Released in 1937 and partly based on the legend of Bonnie and Clyde, You Only Live Once is an early film noir classic. Directed by Fritz Lang, his second American film, You Only Live Once stars Oscar winning actor Henry Fonda (Grapes of Wrath, Twelve Angry Men) and Sylvia Sidney (Fury, Blood On The Run).

Eddie Taylor (Fonda) is a three-time convict completing his third term for felony. One more offense, the warden warns him and he will be returned to prison for life. Taylor is not a bad sort though, he has made his mistakes, but he has paid for them. All he wants now is a job, a home for the girl who has been waiting for him, Joan Graham (Sidney) and a family. He gets a truck-driving job, marries Joan and even makes a down payment on a little house.

Sadly, everything falls apart: he loses his job and a hat, bearing the initials "E.T", found at the scene of a fatal bank robbery, which is enough to convince a jury of his guilt. So he is forced to flee with his wife and baby on the way. In trying to avoid capture, Taylor becomes a murderer for real.

Related Articles
The Big Heat, Secret Beyond The Door, The Woman In The Window: Masters of Cinema
The Ox-Bow Incident, Once Upon A Time In The West, Madigan: Limited Edition
Mars Attacks
I Dream Of Jeannie: Season 1
Comments
BD Releases News Pick

BD
After moving to a new town, two brothers discover that the area is a haven for vampires as the classic The Lost Boys is released on 4K UHD 20th September 2022 from Warner Home Video. END_OF_DOCUMENT_TOKEN_TO_BE_REPLACED
Top PicksView