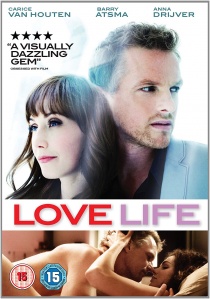 When successful advertising executive Stijn (Atsma) meets a beautiful business colleague, Carmen (van Houten), it's a true case of love at first sight. A whirlwind romance leads to marriage, the birth of a daughter and a passionate relationship that is deep enough for Carmen to allow serial philanderer Stijn his frequent infidelities. However, their seemingly perfect world is eventually shattered when Carmen is diagnosed with breast cancer and begins a devastating course of treatment as she fights for survival.

Carmen's struggle to deal with her situation has an equally damaging effect on Stijn, who takes solace from the pains of caring for a seriously ill wife in the arms of a free-spirited artist, Rose (Drijver). As Carmen's condition deteriorates, Stijn's own life begins to spiral out of control until he is finally forced to accept what love really is and to consider the true meaning of the marital vow "for better or for worse".

A romantic, sexy and uncompromising modern love story that isn't afraid to raise uncomfortable questions about relationships and mortality, Love Life is "an engaging and ultimately moving drama" (ViewAukland.co.nz) bolstered by a powerful, award winning performance from Carice van Houten.

BD
Will Smith and Martin Lawrence are back on the case in the roles that launched the dynamic duo to global superstardom in Bad Boys For Life, arriving on DVD, Blu-ray and 4K UHD 25th May 2020 from Sony ... END_OF_DOCUMENT_TOKEN_TO_BE_REPLACED
Hot PicksView