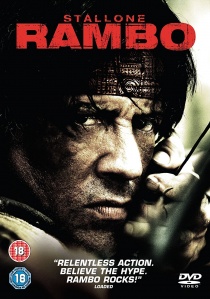 He' back! Sylvester Stallone (Rocky, Cliffhanger) reprises his role as the ex-Vietnam hero in the explosive fourth instalment of Rambo, which is released to buy on DVD, Blu-ray, UMD Video and to rent on DVD from 23rd June 2008, courtesy of Sony Pictures Home Entertainment.

Having survived many a treacherous campaign, Vietnam vet John Rambo (Stallone) has withdrawn to lead a simple life in a remote Thai village near the Burmese border. A group of Christian missionaries plead with him to ferry them into the war-torn neighbouring country to deliver much needed aid to the downtrodden Karen people.

Reluctantly Rambo agrees to make the dangerous journey and the missionaries head off into the remote jungle. Having finally reached their destination the missionaries are attacked and kidnapped when the village they are staying in is raided by government soldiers led by the sadistic Major Pa Tee Tint (Maung Maung Khin).

When they fail to return, Rambo leads a team of crack mercenaries back into the jungle on a mission to rescue the captives with explosive consequences. The team including Lewis (Graham McTavish) and sniper Schoolboy (Matthew Marsden, Resident Evil: Extinction, Black Hawk Down) raid the enemy camp with devastating effect which leads to the mother of all fights taking place and Rambo back doing what he does best, killing!

Written and directed by Stallone, Rambo features some of the bloodiest battle scenes ever seen on screen and includes adrenaline-fuelled action throughout. Packed full of exciting extras the DVD includes commentaries with Stallone and a host of featurettes including It' a Long Road: The Resurrection of an Icon, Preparing a Warrior: Finishing Rambo and Legacy of Despair: The Real Struggle of Myanmar.

The Blu-ray release also boasts an array of exclusive extras including Picture in Picture commentary with Stallone and branching featurettes on the casting, shooting and visual FX. The release is also available as part of a fantastic 1-4 DVD box set containing all four of the iconic action films.

UHD
Evil resurfaces in Derry as director Andy Muschietti reunites the Losers Club in a return to where it all began with IT Chapter Two, the conclusion to the highest-grossing horror film of all time, ... END_OF_DOCUMENT_TOKEN_TO_BE_REPLACED
Top PicksView