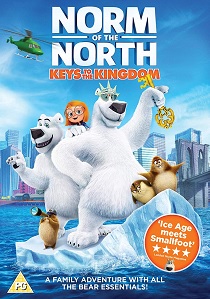 NewsAnimationFamily
News Article Go back to homepage
Take to the ice this half-term as Norm of the North returns for another animated adventure in Norm Of The North: Keys To The Kingdom, out to own on DVD 18th February 2019 from Lionsgate Home Entertainment.
Andrew Toth, Maya Kay, Alan Marriott, Maureen Jones, Lee Tockar, Jonathan Holmes
Richard Finn, Tim Maltby
Daniel Altiere, Steven Altiere, Ken Katsumoto
Lionsgate Home Entertainment
1 hour 31 minutes
18/02/2019
#NormOfTheNorthKeysToTheKingdom
Thank you for supporting DVD365.net when you order using the link(s) below. As an Amazon Associate we earn from qualifying purchases
Buy DVD
Information

Take to the ice this half-term as Norm of the North returns for another animated adventure. The latest full-length feature from our favourite polar bear - Norm Of The North: Keys To The Kingdom - is out to download from 11th February 2019 and own on DVD from 18th February 2019 from Lionsgate Home Entertainment.

Norm, the newly crowned king of the North, travels to New York with his son to accept the keys to the city. But Norm goes from hero to villain when he's framed for a crime he didn't commit! While he is trying to uncover the real criminal, back in the Arctic a vicious bottled-water company has moved in and is starting to steal the ice.

Norm must rely on his friends, both old and new, to clear his good name and help save his kingdom in a thrilling winner-takes-all hockey match. He also learns some good lessons about leadership in this fun new film.

DVD
One of the most compelling and conflicted characters in Sony Pictures Universe of Marvel Characters comes to the big screen as Jared Leto transforms into the antihero Michael Morbius as Morbius is released on 4K Ultra HD, Blu ... END_OF_DOCUMENT_TOKEN_TO_BE_REPLACED
Top PicksView