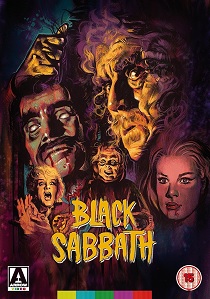 Black Sunday was such a huge hit that a follow-up was swiftly demanded, and horror maestro Mario Bava duly devised this three-part horror anthology blending modern and period stories.

In the giallo-style The Telephone, a woman is terrorised by her former pimp after his escape from prison, and tries to escape him with the help of her lesbian lover, who has a dark secret of her own. In the Victorian-era The Drop of Water, a nurse steals a ring from the corpse of a dead spiritualist, which naturally tries to get it back. But it's the 19th-century Russian story The Wurdalak that comes closest to Bava's earlier classic, with the great Boris Karloff as a much-loved paterfamilias who might not be entirely what he seems.

Bava's direction is as stylish as ever, and Black Sabbath, released on DVD and Blu-ray 18th December 2017 from Arrow Films, is almost a compendium of his favourite themes.

Related Articles
The Raven, The Comedy of Terrors, Frankenstein/The Bride of Frankenstein (Collector's Edition)
The Fall of the House of Usher
Blood and Black Lace, Rabid Dogs
Comments
Hot Pick