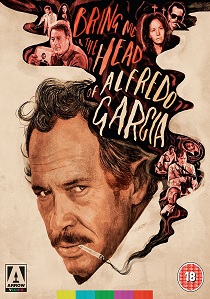 NewsAction
News Article Go back to homepage
An American bartender and his prostitute girlfriend go on a road trip through the Mexican underworld to collect a $1 million bounty on the head of a dead gigolo in Bring Me the Head of Alfredo Garcia, released on Blu-ray with a new 4K restoration by Arrow Films on 23rd January 2017.
Warren Oates, Gig Young, Isela Vega, Robert Webber, Helmut Dantine, Emilio Fernández
Sam Peckinpah
Martin Baum
Arrow Films
1 hour 52 minutes
23/01/2017
#BringMeTheHeadOfAlfredoGarcia
Thank you for supporting DVD365.net when you order using the link(s) below. As an Amazon Associate we earn from qualifying purchases
Buy BD
Information

Bring Me the Head of Alfredo Garcia, released on Blu-ray by Arrow Films on 23rd January 2017, concluded a remarkable period for filmmaker Sam Peckinpah. It brought to an end a seven-year and seven-film run of masterpieces that included the taboo-breaking ultra-violence of The Wild Bunch and Straw Dogs, and the more elegiac tones of The Ballad of Cable Hogue and Junior Bonner. A love story that plays out in a brutal environment, Bring Me the Head of Alfredo Garcia sits somewhere between these moods and may just be Bloody Sam's greatest work, as well as his most autobiographical.

Warren Oates plays Bennie, a piano player in a Mexican bar who gets himself involved in the manhunt for Alfredo Garcia, a man with a million-dollar price-tag on his head having impregnated the daughter of crime boss El Jefe (Emilio Fernández). Sensing an easy pay day, Bennie takes his girlfriend, Elita (Isela Vega) on a trip that ll prove fatalistic for many of those involved.

During a career that was blighted by studio interference, Peckinpah would later say that Bring Me the Head of Alfredo Garcia was the only which ended up exactly as he wanted: I did it exactly the way I wanted to. Good or bad, like it or not, that was my film. And it was. This is as close to Pure Peckinpah as it gets beautiful, violent, troubling, heartbreaking, astonishing.

DVD
One of the most compelling and conflicted characters in Sony Pictures Universe of Marvel Characters comes to the big screen as Jared Leto transforms into the antihero Michael Morbius as Morbius is released on 4K Ultra HD, Blu ... END_OF_DOCUMENT_TOKEN_TO_BE_REPLACED
Top PicksView