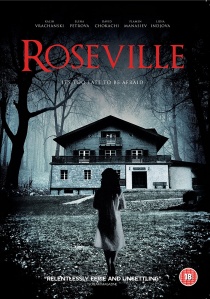 On 18 November 1985, police found four bodies in an isolated mountain hut Roseville. One of the guests, a young man named Vasil is missing. The case is still labelled "unsolved crime". The film's artistic interpretation is based on direct and indirect police information about Vasil's stay in Roseville.

Here for his honeymoon with his wife, he soon felt a strange presence in his nightmares and became paranoid while realising he was predestined to come in Roseville right now. And when the other guests saw that Vasil changed, it was too late to leave. The entity which controlled Vasil just wanted victims.

Roseville is released on DVD by Matchbox Films on 29th December 2014.

BD
In The Black Phone, released on DVD and Blu-ray 3rd October 2022 from Warner Home Video, a teenage boy is abducted by a sadistic killer and discovers a phone in his basement cell that allows him to communicate with the killer ... END_OF_DOCUMENT_TOKEN_TO_BE_REPLACED
Top PicksView