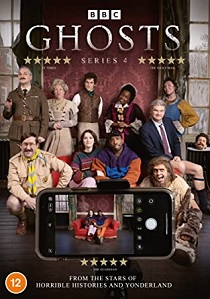 The crumbling country pile of Button House is home to numerous restless spirits who have died there over the centuries - each ghost very much a product of their time, resigned to squabbling with each other for eternity over the most inane of daily gripes. But their lives - or, rather, afterlives - are thrown into turmoil when a young urban couple - Alison and Mike - surprisingly inherit the peaceful derelict house and make plans to turn it into a bustling family hotel.

As the ghosts attempt to oust the newcomers from their home, and Mike and Alison discover the true scale of the project they've taken on, fate conspires to trap both sides in an impossible house share, where every day is, literally, a matter of life and death.

Written and created by the stars of Horrible Histories and the creators, writers and stars of fantasy comedy Yonderland and the feature film Bill, this fourth series sees resident ghosts and cash-strapped couple Mike and Alison face life changing events at Button House.

Alison and Mike are determined to get the best reviews from the guests at their luxury new B&B. However, buried secrets, booking mix-ups and open war with neighbours all collide to create a chaotic series of events which threatens to derail their dreams.

HotDVDBD
From the producers of Nobody and John Wick comes a bare-knuckle, coal-dark holiday action-comedy that says you should always bet on red as Violent Night sledges in on DVD and Blu-ray 6th March 2023 from Warner Home Video. END_OF_DOCUMENT_TOKEN_TO_BE_REPLACED
Top PicksView