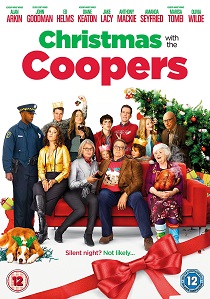 An all-star cast unite to celebrate the season in this must have holiday movie. Christmas with the Coopers is a festive delight out to unwrap on DVD from 21st November 2016 courtesy of Entertainment One.

Every Christmas Sam Cooper (John Goodman) and his wife Charlotte (Diane Keaton) want nothing more than to host the perfect festive feast for all their loved ones where absolutely nothing can go wrong.

But old dramas, some bizarre quirks and family bickering soon promise to derail the evening with Sam and Charlotte's efforts to contain the chaos creating a hilarious festive disaster that leads to the surprising rediscovery of family bonds and the spirit of Christmas...

Resident Evil: The Final Chapter, marks the sixth and final installment in the astoundingly successful film franchise adaptation of Capcom's hugely popular video game series, having grossed over $1billion worldwide to date, earning consistent No. 1 openings at the box-office, and being the most successful video game film franchise ever.
Movie quote

Starring #ChrisHemsworth #TomHiddleston, out our trending #NewsArticle on #ThorRagnarok available on #DVD #Bluray…