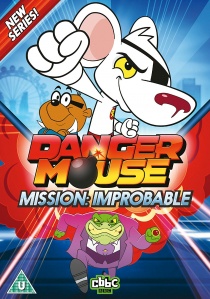 He's the greatest, he's fantastic and he's back! Danger Mouse, the world's greatest secret agent has returned with a brand new series, his mission: to protect the world, multiple universes and Willesden Green from the villainous machinations of the evil Baron Greenback. Six of his epic new adventures plus the double-length launch episode will be available to own on DVD from 2nd November 2015, courtesy of FremantleMedia Kids & Family Entertainment.

The new series is bursting at the seams with terrific tales of derring-do and random ridiculousness that DM is famous for but with a 21st Century twist that sees our hero venturing even further afield to save the world with a dazzling array of high tech gadgetry and transportation that only the greatest secret agent could ever dream of owning.

Of course, every top agent needs a tip top team to support him and DM's return sees him joined by some familiar faces as well as some new ones. DM is reunited with his right-hand hamster, Penfold and Colonel K is back to keep a watchful eye over every mission. A modern day secret agent needs state of the art gadgets and luckily for DM, the ingenious Professor Squawkencluck has joined the team and has a gadget for every occasion, although how long they'll stay in one piece in DM's hands is another question...

The opening episode of the new series sees DM's return and almost instant dismissal after he inadvertently destroys most of London. What's more, it would appear that Baron Greenback has turned over a new leaf and is supplying law enforcement robots to everyone for free. However DM isn't convinced by this change in character and pretty soon uncovers the Baron's real intentions for his robot army.

The new series is brought to life by a stellar line up of voice talent including Alexander Armstrong (Danger Mouse), Kevin Eldon (Penfold), Stephen Fry (Colonel K), Shauna MacDoanld (Professor Squawkencluck) and Come Dine With Me's Dave Lamb as The Narrator. There are plenty more familiar voices to be heard throughout the series including Ed Gaughan, Morwenna Banks, Kavan Novak and Richard Osman.

This new series stays true to the witty storytelling and high octane action of the original show but with a modern twist, making it must-see viewing for new and old fans alike.