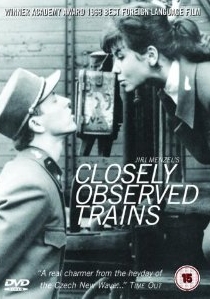 Hailed as 'an utter delight' by Empire magazine in its Five Star review during its theatrical release, I Served The Kind Of England comes to DVD from Arrow Films on 17th November 2008 and riding a wave a critical acclaim.

Written and directed by Jiri Menzel, the director of the Academy Award winning Closely Observed Trains, and based on the novel by celebrated Czech author and long-time friend of Menzel's, the late Bohunil Hrabal, the 'delightful' (Daily Express, Four Star review) I Served The Kind Of England is a 'marvelously funny' (Evening Standard) comedy about opportunism, identity, money and sex that effortlessly mixes wit and slapstick with sharply observed political and social satire. The winner of the FIPRESCI Prize at the 2007 Berlin International Film Festival and of four Czech Lions (the country's most prestigious film awards), the film was the Czech Republic's official submission to the Best Foreign Language Film category of the 80th Annual Academy Awards in 2008.

Young provincial waiter Jan Dite may be short in height but his aspirations are nothing but high when it comes to ambition. For Jan is determined to become a millionaire and he knows just how to do it. Continually watching and listening to his superiors and his high-flying, big-spending customers, Jan learns how to succeed by pleasing others. His progress sees him leaving his first job in a bar and moving first to a high-class brothel and, finally, to an elegant, art nouveau restaurant in Prague. But things are about to change.

It's the 1930s and Hitler's troops are breaking Czechoslovakia apart. During these troubled times, Jan meets and falls in love with Lise, a German girl fanatically proud of her Aryan roots. No sooner have they married than Lise enlists in the German army and heads off to fight on the front line. She returns safely and in possession of a fortune in rare stamps that the dispossessed Jewish families had allegedly left behind. Tragedy strikes, however, but Jan briefly realises his dream of becoming a millionaire before the new Communist regime sentences him to 15 years in prison -- one year for each of his millions. Upon his release, and now an old man, he is sent to live in an abandoned border town, where he finds the leisure to reflect upon the events that shaped his remarkable and eventful life.

I Served The Kind Of England is an enthralling and delightfully life-affirming comedy about an immensely likeable and sympathetic character whose infectious passion for living will charm even the most hardened cynics.

UHD
After more than thirty years of service as one of the Navy's top aviators, Pete 'Maverick' Mitchell is back where he belongs as Top Gun: Maverick flies onto DVD, Blu-ray and 4K UHD 31st October 2022 from Paramount Home ... END_OF_DOCUMENT_TOKEN_TO_BE_REPLACED
Top PicksView