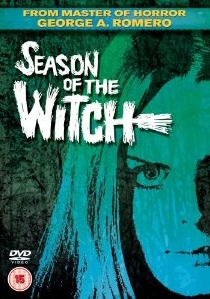 Filmed as 'Jack's Wife' and briefly released in the US under the title 'Hungry Wives', horror maestro George A. Romero's third film, Season Of The Witch, released on DVD (£12.99) by Anchor Bay Entertainment on 20th October 2008, is the disturbing story of a suburban housewife's descent into extramarital sex and the occult.

Released for the first time on DVD in its original extended and uncut form on 20th October, Season Of The Witch is a must-see for fans of the man responsible for the vampire chiller, 'Martin' and the zombie classic Night Of The Living Dead and its numerous sequels. Joan Mitchell is an unhappy housewife pushing 40, who has an uncommunicative husband and a distant 19-year-old daughter.

Frustrated by her current situation, Joan seeks solace in witchcraft after visiting a local tarot reader, who inspires her to follow her own path. After dabbling in witchcraft, Joan, believing herself to have become a real witch, withdraws into a fantasy world until the line between fantasy and reality becomes blurred and eventually tragedy results.

Related Articles
Night Of The Living Dead: The Criterion Collection, Creepshow, Knightriders, George A. Romero's Diary Of The Dead, The Dark Half, Dawn Of The Dead: Limited Edition
Comments
BD Releases News Pick