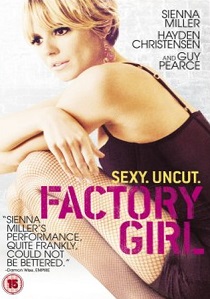 Sedgwick appeared to be the quintessential American princess, with her blue blood, her trust fund and her Harvard education, not to mention her ethereal beauty and vivacious charisma. But she was also a lost and fragile little girl; and when she met up with counter-culture anti-hero Andy Warhol, everything changed. Suddenly, Edie found herself at the centre of a Pop Art universe bursting with sex, drugs, style and rock 'n' roll -- and a mad rush for fame and fabulousness that was destined to spin out of control.

Arriving into the chaos of mid-60s New York, Edie (Sienna Miller) is taken under the wing of the famously deadpan artist Andy Warhol (Guy Pearce) who sees in her untamed vulnerability the makings of an irresistible muse. Warhol invites Edie into the wild world of The Factory, a former downtown hat factory he has transformed into a bohemian paradise. Here, a rag-tag mix of musicians, poets, artists, actors and misfits gather to create avant-garde movies during the day and throw glam parties all night long.

Edie quickly ascends to become the star of Warhol's movies, an idol at The Factory and a media darling. She is on top of the world when she falls in love with a larger-than-life rock star (Hayden Christensen). But when Edie becomes caught between Warhol's world of sexy surfaces and her new love, she winds up rejected by both - and once again, set adrift in the modern world.