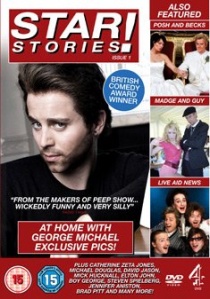 Star Stories, released on 30th July 2007 courtesy of 4DVD, is the British Comedy Award-winning fantastical dramatisation from the makers of Peep Show, exposing the private stories behind celebrities public image. In an age where celebrity worship is the new religion, Star Stories is a light-hearted and tongue-in-cheek, six-part comedy series which forces open the doors of the closely guarded world of celebrity, as the lives and loves of Hollywood actors and international pop stars are satirically reconstructed. Now there's a chance to see what may have happened at those talked about weddings, launches, back-stage parties and family feuds.

Available to own for the first time ever, the critically-acclaimed Star Stories provides a fascinating insight into the weird and wonderful worlds of the A-listers. Featuring a host of up-and-coming British talent including Kevin Bishop (Spoons), Matt King (Peep Show) and Rhys Thomas (The Fast Show), Star Stories is a glossy, fast-paced, antidote to the notion of celebrity. Celebrities to receive the irreverent Star Stories treatment include tabloid favourites such as Sadie Frost & Jude Law, Catherine Zeta Jones & Michael Douglas, George Michael, Madonna & Guy Ritchie and Jennifer Aniston & Brad Pitt.

The award-winning show is a collaboration between writers Bert Tyler-Moore and George Jeffries and writer and producer Lee Hupfield. Headed up by a regular troupe of young and exciting talent, each episode focuses on a different celebrity and their just-as-famous friends and partners. Their existence is put under the microscope in a sacrilegious biopic of their lives to date. Star Stories will raise laughs and ruffle feathers in equal measure.

The DVD features a wealth of extras including an on-set diary, out-takes, music videos, rehearsals and extended scenes. The extras also include previously unseen deleted materials.

UHD
Based on the global blockbuster videogame franchise from Sega, Sonic The Hedgehog, released on DVD, Blu-ray and 4K UHD from 8th June 2020 from Paramount Home Entertainment, tells the story of the ... END_OF_DOCUMENT_TOKEN_TO_BE_REPLACED
Hot PicksView