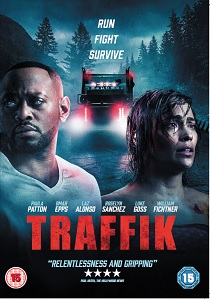 A romantic getaway descends into terror for Brea and her boyfriend John when they run into a brutal biker gang. They manage to escape to a secluded mountain estate for the weekend, but their short-lived joy ends when the gang turn up at their front door demanding they return a stolen item they've accidentally acquired.

Alone and defenceless Brea and John are forced into a deadly fight for their lives against a ring of violent criminals who will go to any lengths to protect their secrets.

Directed by Deon Taylor (Supremacy, Meet The Blacks) Traffik is a thrilling ride through a couple's worst nightmare.

HotDVDTV
Featuring every episode of the entire series in an 8-disc box set, the hilarious BBC comedy Keeping Up Appearances is released on DVD 28th November 2022 ... END_OF_DOCUMENT_TOKEN_TO_BE_REPLACED
Top PicksView