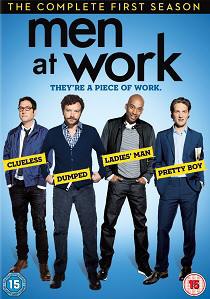 Man up with the guys from TBS' original series Men at Work - the bold new sitcom following four friends navigating their ways through work, friendship and women - when Sony Pictures Home Entertainment releases Men at Work: The Complete First Season on DVD on 1st July 2013.

Danny Masterson (TV's That '70s Show), Michael Cassidy (TV's The OC), Adam Busch (TV's Buffy the Vampire Slayer), Meredith Hagner (TV's Royal Pains) and James Lesure (TV's Las Vegas) star in this edgy series' first season, which introduces Milo just as he breaks up with his longtime girlfriend. But rest assured his three closest buddies are right there to help him get back in the game, and no matter what mischief ensues, these friends have each other's backs.

Men at Work centres on four buddies who work together at a magazine. After recently being dumped, Milo's friends are determined to help him get back in the dating game. The group includes Gibbs, a photographer and successful ladies man, Tyler, a features writer who brings a dose of style and sophistication to the group and Neal, a somewhat nerdy, sensitive ad salesman who happens to be the only one in the group with a steady girlfriend (Meredith Hagner). The well-intentioned guys take on mating, dating and relating to women, and while they may not always get it right, they definitely have a good time trying.