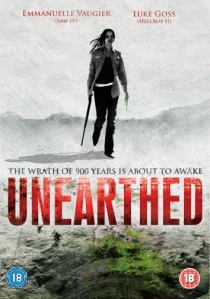 Unearthed tells the story of an unknown creature that terrorizes an archaeological dig in the middle of a desolate New Mexico town. As the carnage escalates and bloodshed stains the desert sand, the local sheriff and a group of stranded civilians must band together to destroy the creature before it destroys them.

The behind-the-scenes team is comprised of director of photography Ross Richardson, production designer Chris Demuri, costume designer Carolyn Leone-Smith, and editor Shawna Callahan. The stunt coordination on the film is choreographed by Go Stunts, the team responsible for The Dukes of Hazard, Superman Returns and Spiderman 3. Combustion Studios, founded by DJ Marini and TyRuben Ellingson, are designing the film's special effects and creature design.