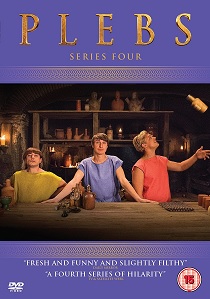 When in Rome, de de de...do as the Romans do! Here come the Romans in the hilarious comedy Plebs, which returns for its fourth series on ITV2 before marching on to DVD alongside Plebs Series 1 - 4 DVD Box Set courtesy of Acorn Media International.

Plebs follows the lives of three hapless young men from the suburbs as they try to get laid, hold down jobs and climb the social ladder in the big city. Penned by Sam Leifer (How Not to Live Your Life) and Tom Basden (Fresh Meat) and starring Tom Rosenthal (Friday Night Dinner), Ryan Sampson (Dennis and Gnasher: Unleashed), Jonathan Pointing (Pls Like) and Joel Fry (Requiem), alongside a stellar cast and inspired guest stars, this hugely popular sitcom makes its welcome return on DVD on 28th May 2018.

We travel back to Ancient Rome for series four as the sudden departure of Stylax (Fry) and equally sudden arrival of dumb blonde builder Jason (Pointing), throws the lives of the Plebs - Marcus (Rosenthal), and his lazy slave Grumio (Sampson) - into turmoil. But upheaval gives way to hope when they manage to wangle an abandoned toilet from crooked property developer Crassus (Robert Lindsay - My Family) which they decide to convert into Rome's hottest new wine-bar 'The Crown and Toga'.

With Grumio as head-chef, Jason and waterboy/man Aurelius (Basden) on drinks and Marcus as manager, this could be the boys' chance to finally hit the big time and become players in the most exciting city in the world. But first they have to grapple with Rome's leading food critic (Annette Badland - Charlie and the Chocolate Factory), launch a cabaret night with scathing satirist (Aisling Bea - Trollied), take part in the city's Marathon and host a snail-racing syndicate - before coming up against their biggest challenge so far, an aggressive takeover bid from a local Germanian bar famous for their popular brown-liquid 'beer'.

In series two, Stylax wants to become a champion charioteer, but he doesn't own a chariot and he can't drive. Meanwhile, business is booming for their dodgy Landlord who is now accompanied by massive henchman, Davus (Tom Davis - Action Team). Guest stars include Simon Callow (Four Weddings and a Funeral), Shaun Williamson (Extras), Lauren Socha (Misfits), Tim Key (Alpha Papa), and James Fleet (The Vicar of Dibley).

We join series three as the Games arrive in town, but the Plebs can't get tickets for any event - not even the pig chase. An encounter with a fiery Gallic activist, Delphine (Bella Dayne - Humans) might improve Marcus' romantic stakes. Could she become his Gaul-friend? As well as their regular nemeses, this year our Plebs encounter a legion of new Roman recruits including visiting parents (Samantha Spiro - Me Before You), Danny Webb - Liar), Steve Edge - Phoenix Nights), a brazen Vestal Virgin (Michelle Keegan - Our Girl), a theatrical grande dame (Miriam Margolyes - Harry Potter and the Deathly Hallows) and an ancient weatherman (David Bamber - Pyschoville)

Put on your toga and sandals and get ready for a right Roman riot.

DVD
In Brian And Charles, released on DVD and Blu-ray 10th October 2022 from Mediumrare, an inventor lives alone in a remote village in the countryside, inventing useless things out of found objects in his garage. That is until ... END_OF_DOCUMENT_TOKEN_TO_BE_REPLACED
Top PicksView