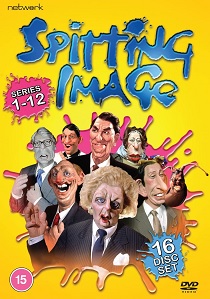 A milestone in television comedy, Spitting Image lifted satire to a new level for over a decade throughout the 1980s and '90s. This collection brings together the first twelve series of this exceptionally topical, BAFTA-winning hit show.

Spitting Image featured the talents of, among others, Phil Cornwell, Harry Enfield, Kate Robbins, Jon Glover, Jessica Martin, Steve Coogan, John Sessions, Rory Bremner and Steve Nallon. No target was safe from the series' gunsights; politicians of all persuasions, Ronald Reagan, Mary Whitehouse, Mick Jagger, the Pope and even the Royal Family could find themselves up for a ribbing on any given programme.

Memorable highlights include 'The President's Brain is Missing', which detailed the ongoing shenanigans at the White House, Chernobyl absolutely not exploding, Maggie Thatcher finally losing her grip on reality, sharing some intimate moments over dinner with John and Norma Major and, of course, the rendition of a certain song that advocates holding a chicken in the air!

UHD
The end of the line is only the beginning in a wild, non-stop thrill ride through modern-day Japan as Bullet Train is released on DVD, Blu-ray and 4K UHD 24th October 2022 from Sony Pictures Home Entertainment END_OF_DOCUMENT_TOKEN_TO_BE_REPLACED
Top PicksView