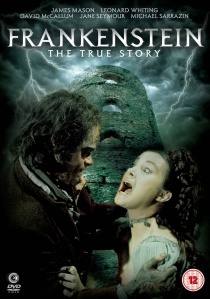 One of the most acclaimed versions of Mary Shelley's classic Frankenstein: The True Story, featuring a stellar all-star cast including James Mason and Leonard Whiting, makes its UK DVD debut thanks to Second Sight Films.

Made in 1973 this much lauded film also stars David McCallum (The Man From U.N.C.L.E.), Jane Seymour (Live and Let Die), Tom Baker (Doctor Who), Ralph Richardson (The Fallen Idol), John Gielgud (Ghandi) and Peter Sallis (Last of the Summer Wine) and will be released for the first time on DVD on 10th March 2014.

In 19th century England, Dr Victor Frankenstein (Whiting - Romeo and Juliet), bitter over his brother's untimely death, voices his wish that men could have power over life and death. Following a chance encounter with Dr Henry Clerval (McCallum), a surgeon experimenting in this very field, they join forces and Victor achieves the impossible, the creation of life. He creates a handsome, highly intelligent young man (Michael Sarrazin - The Gumball Rally), but unforeseen problems and the involvement of evil scientist Dr Polidori (Mason - North By Northwest) lead to shocking, unimaginable horror.

This outstanding classic horror is a must-see.

Related Articles
Journey To The Center Of The Earth: Eureka Classics, The Man Between, Odd Man Out, Murder By Decree, Screen Icons: James Mason, The Verdict, Murder By Decree
Hooten and the Lady, Austenland, Battlestar Galactica : The Movie, Live and Let Die, Little Italy
The Invisible Man, Return Of The Man From U.N.C.L.E., Sapphire And Steel, The Invisible Man: The Complete Series
Comments
BD Releases News Pick