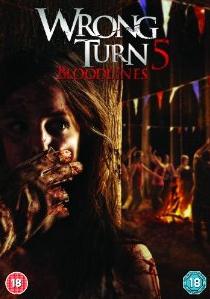 Horror's most hideous hillbillies are back and more bloodthirsty than ever as Wrong Turn 5 arrives on DVD on 28th January 2013, from Twentieth Century Fox Home Entertainment.

This time around a small West Virginia town is hosting the legendary Mountain Men Festival on Halloween, with throngs of costumed partygoers gathering for a wild night of music and mischief. But the trick or treating takes a sinister turn when a vicious family of inbred cannibals - including series stalwarts Three Finger, Saw-Tooth and One-Eye - decide to dine on a group of visiting college students.

Starring horror legend Doug Bradley (Hellraiser) and directed by Wrong Turn 3 and 4's Declan O'Brien, Wrong Turn 5 ups the ante on the series' already gory history, delivering thrills and chills that promise to be even more stomach-churning than ever before.

The latest offering from the Wrong Turn stable also features a host of devilish DVD extras, including an audio commentary with O'Brien and 'A Day In The Death' featurette. And for aficionados of gore everywhere, the superb Wrong Turn 1-5 DVD box set is also available on the same day - perfect for fans in need of a Wrong Turn feast!

BD
A 13-year-old girl named Meilin turns into a giant red panda whenever she gets too excited in Disney and Pixar's 25th feature film Turning Red, released on DVD, Blu-ray and 4K UHD 2nd May 2022 from Walt Disney Home ... END_OF_DOCUMENT_TOKEN_TO_BE_REPLACED
Top PicksView