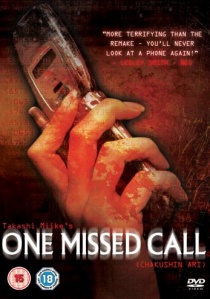 With a US remake starring Edward Burns (Saving Private Ryan) and Shannyn Sossomon (The Holiday) on the horizon, the forthcoming DVD release of the original (in every sense of the word) hit Japanese thriller One Missed Call, released on DVD by Premier Asia on 4th February 2008, couldn't be more timely.

Directed by the notoriously controversial and incredibly prolific J-horror master Takashi Miike (Audition; Ichi The Killer; The Happiness Of The Katakuris) and starring Japanese singing and acting superstar Kou Shibasaki (Battle Royale), One Missed Call is a cool and knowing shocker that turns a once-benign every day object - the mobile phone - into a technological tool of supernatural terror.

When a young college student receives a mysterious phone message from herself, sent from three days in the future and ending with a spine-chilling scream, she assumes it is just part of an elaborate prank. Three days later, when she is violently killed at the exact time the message was sent, her best friend Yumi Nakamura (Shibasaki) becomes convinced it was more than just a coincidence. The police, however, don't agree and write off the young woman's death as a suicide.

But as more young people begin to receive similar phone messages from their future selves, all predicting and ending in their violent deaths, it becomes apparent that this is something more than a prank and that vengeful supernatural forces may be at work. The media response is predictably exploitative, with one TV company televising a live countdown to an unfortunate victim's predicted demise in a morbidly bizarre reality show. As her friends continue to die, one by one, in inexplicable circumstances Yumi teams up with the brother of the first victim of this strange technological epidemic in the hope of uncovering the mystery. But as the pieces of the puzzle slowly begin to fall into place, Yumi notices that she, too, has one missed call...

Director Takashi Miike once again brings his own inimitable style to the J-horror genre in a film packed with mystery, suspense and a touch of his trademark black humour. A fun ride for horror fans it may be, but be warned, One Missed Call may make you think twice the next time you have to check your voice-mail.

HotDVDBD3D-BDUHD
The producers of Godzilla reimagine the origins of one the most powerful monster myths of all in Kong: Skull Island, released on DVD, Blu-ray, 3D Blu-ray and UHD on 24th July 2017 from Warner Home Video. END_OF_DOCUMENT_TOKEN_TO_BE_REPLACED
Top PicksView