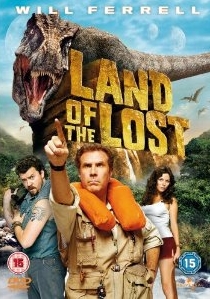 Land Of The Lost

News
News Article Go back to homepage
Comedy superstar Will Ferrell delivers a film packed with great gags, astonishing special effects, edgy escapism and a T-Rex called Grumpy in the 23rd November 2009 Blu-ray and DVD release of the spectacular spoof adventure, Land Of The Lost, released by Universal Pictures UK.
Universal Pictures (UK)
Unknown
23/11/2009
Thank you for supporting DVD365.net when you order using the link(s) below. As an Amazon Associate we earn from qualifying purchases
Buy DVD
Buy BD
Information

Comedy superstar Will Ferrell (Anchorman: The Legend of Ron Burgundy, Stranger Than Fiction, Blades of Glory)delivers a film packed with great gags, astonishing special effects, edgy escapism and a T-Rex called Grumpy in the 23rd November 2009 Blu-ray and DVD release of the spectacular spoof adventure, Land Of The Lost, released by Universal Pictures UK.

This slapstick, gross-out comedy is accompanied by hilarious delete scenes, while the Blu-ray also contains further bonus content, including an 83 minute documentary covering the making of Land of the Lost, a look at The Day in the Life of a Big Time Movie Star and Dr. Marshall's Food Diaries. You need look no further for that elusive must-have Christmas stocking filler!

Will Ferrell stars as has-been scientist Dr Rick Marshall, inventor of a sideways-time-travel device which plays show tunes from A Chorus Line. He is duly sucked into a space-time vortex and spat back into pre-history. Now Marshall has no weapons (well, he has a banjo), few skills and questionable smarts to survive in an alternate universe full of marauding dinosaurs and fantastic creatures from beyond our world - a place of awe-inspiring sights and mega-scaled comedy known as the Land of the Lost.

Somewhere a discredited quantum palaeontologist is going to get stuck: really stuck. Sucked alongside him are whip-smart and pretty damn gorgeous research assistant Holly (Anna Friel, Pushing Daisies) and a redneck survivalist Will (Danny McBride, Tropic Thunder). Chased by a T-Rex and stalked by alien reptiles known as Sleestaks, Marshall, Will and Holly must rely on their only ally, a missing-link primate called Chaka (Jorma Taccone, Saturday Night Live), to navigate out of the hybrid dimension. This is one weird neighbourhood: cheesed-off dinosaurs, talking ape-men, lizardy who-knows-what's living cheek-by-jowl with a wandering ice-cream man (chow for velociraptors), quite a nice motel, and a hologram that sounds just like Leonard Nimoy.

Will Ferrell finds himself in the right place but in the wrong time, as he discovers just how serious a mistake it is to make an enemy of a bitter, grudge-bearing dinosaur. Jurassic leviathans demand respect and wise-cracking out-of-towners are going to get taught a lesson, whether they are camouflaged with dino-pee or not.

Inspired by the classic television series, Land of the Lost is directed by Brad Silberling (Lemony Snicket's A Series of Unfortunate Events), who brought together an impressive special effects team whose credits include The Lion, the Witch and the Wardrobe, Hellboy II, Pan's Labyrinth and Enchanted. Cult 70s TV evolves into profane, surreal, state of the art astonishment - no 70s innocence or zips on the monster costumes here, but a knockabout summer dino-fest peppered with that special Ferrell magic.

BD
An intimate and moving story of childhood memories, Belfast is available to own on Blu-ray and DVD 25th April 2022 from Universal Pictures (UK). END_OF_DOCUMENT_TOKEN_TO_BE_REPLACED
Top PicksView