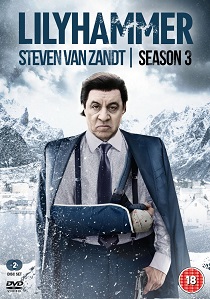 Following the success of their most recent foreign language TV drama titles, most notably Gommorah, 1864, The Saboteurs, and the upcoming Witnesses, Arrow Films will continue to house quality international crime thriller shows from various European territories and beyond, under their sub-label Nordic Noir and Beyond.

These new releases will continue with the arrival of the third season of Lilyhammer, on Blu-ray and DVD on 24th August 2015, following the release of the second series earlier in April. This new disc will feature all 8 episodes of the acclaimed comedy mob saga starring The Sopranos very own Steven Van Zandt.

It's a brand new year for Frank and he starts it with a bang. But with a new year comes a whole host of new problems, including Lithuanian gangs, Brazilian drug cartels and the unexpected return of the self-exiled, Jan.