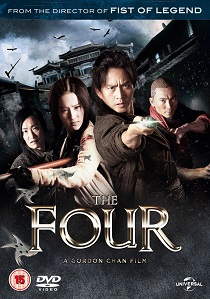 The first feature film adaptation of Wen Ruian's novel series The Four Great Constables (Si Da Ming Bu), The Four, released on DVD by Universal Pictures (UK) on 9th September 2013, transports you into a world where magic, action and mystery reign and where superheroes with fantastic powers wage war on armies of the undead in increasingly spectacular battles.

The Four is a classic Wuxia with a supernatural twist from the director of the magnificent Fist of Legend, Gordon Chan. Filled with stunning action sequences, an intriguing central mystery and brilliant monsters, The Four is a must-see for any martial arts or horror fan.

When counterfeit bills appear in the capital city of the Song Dynasty, a government department known as The Six Panels appoints an undercover agent, Coldblood, to infiltrate a special force called The Divine Constabulary to sabotage their investigations.

Coldblood soon befriends other constables Life Snatcher and Iron Hands as well as the beautiful Emotionless and together they soon discover The Divine Constabulary's real plans - not to flood the capital with fake money, but with a powerful army of the undead...