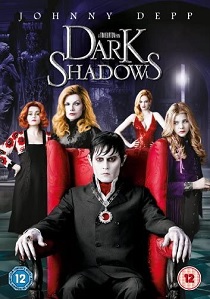 Vampires, werewolves and a family of quirky characters collide as Dark Shadows, arrives onto Blu-ray, DVD and Digital Download on 15th October 2012 from Warner Home Video, just in time for Halloween! The Dark Shadows Blu-ray and DVD copies include an UltraViolet Digital Copy of the film, which allows consumers to download it to a PC or Mac plus instantly stream it from a digital cloud to many computers, tablets or smartphones.

Directed by Tim Burton (Batman, Beetlejuice) and starring Johnny Depp (Charlie and the Chocolate Factory, Corpse Bride) as Barnabas Collins, Dark Shadows follows the tale of vampire awoken from a multi-century sleep, only to find that his family business is near ruin, his descendants are struggling and his past is back to haunt him.