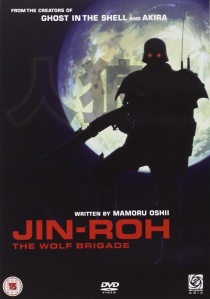 Originating from Mamoru Oshii (Ghost in the Shell), one of the leading figures in Japanese animation, director Hiroyuki Okiura's Jin-Róh, released by Optimum Asia on 3rd September 2007, is a visually and thematically compelling addition to the animé tradition. With its emotionally paralyzed hero, hints of doomed romance and pervading sense of loss and despair, the film has echoes of film noir, Hitchcock and operatic tragedy.

Ten years after World War II Japan is in decline. Emergency measures to boost the economy have created disturbing social problems and in Tokyo an elite police force known as the Capital Police Organization has been created. Its primary foes are a terrorist group called the Sect.

Kazuki is a mournful Capital Police officer whose life is ruined by a moment of compassion whilst pursuing a teenage member of the Sect armed with a Molotov cocktail. Raising his gun to shoot her, Kazuki hesitates and makes eye contact. In that brief moment she detonates the device, dying in the explosion. Made a scapegoat by the Capital Police, Kazuki forms a dangerous bond with the dead-girl's identical sister.

Produced by the acclaimed and visionary I.G. Production Company, whose international influence was acknowledged when they collaborated with Quentin Tarantino for the animation sequences in Kill Bill, Jin-Róh is a rich and complex work of subtle ambiguities and emotional depth. Lent added resonance by contemporary events, the film also acts as a metaphor for the political situation in countries past, present and future.

Originally screened as part of the Panorama section of the 49th International Berlin Film Festival, the film's numerous international prizes include the Jury's Special Prize at Fantasporto.

DVD
For the first time in the cinematic history of Spider-Man, our friendly neighborhood hero's identity is revealed in Spider-Man: No Way Home, released on DVD, Blu-ray and 4K UHD 4th April 2022 from Sony Pictures Home ... END_OF_DOCUMENT_TOKEN_TO_BE_REPLACED
Top PicksView