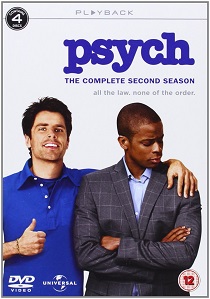 Prepare to be dazzled by a 'psychic' with absolutely no ability when Psych: Season 2 is released on DVD on 7th June 2010, courtesy of Universal Playback.

Psych is an American comedy crime drama originally broadcast on the USA Network and is created and written by Steve Franks (Big Daddy). Set in Santa Barbara, it revolves around a young police consultant, Shawn Spencer (James Roday), who solves crimes with his 'heightened observational skills'. These powers are so acute; the precinct detectives think he's psychic...at least that's what he lets them believe!

Psych also stars Dulé Hill (The West Wing) as Shawn's best friend and reluctant sidekick Gus, and Corbin Bernsen as Shawn's disapproving father Henry, who ironically was the one who honed his son's 'observation' skills as a child. Also featured are Timothy Omundson and Kirsten Nelson.

Psych: Season 2, comprising of sixteen episodes began airing in the US in July 2007 and the series is still going strong with two Emmy Award nomination's for Best Comedy Series in 2008 and 2009. Key highlights from Season 2 include 'American Duos' where Shawn gives his protection to a talent-show judge after multiple failed attempts to kill him and 'Shawn (and Gus) of the Dead' where a mummy mysteriously goes missing from the Sedore Museum of Cultural Anthropology.