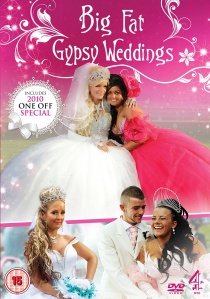 News
News Article Go back to homepage
Big Fat Gypsy Weddings, Channel 4's revealing documentary series that offers a window into the secretive, extravagant and surprising world of gypsies and travellers in Britain today is out to own on DVD on 18th April 2011 from 4DVD.
Neil Rawles, Osca Humphreys
Jes Wilkins, Mark Soldinger, Jenny Popplewell, Osca Humphreys
4DVD
Unknown
18/04/2011
Thank you for supporting DVD365.net when you order using the link(s) below. As an Amazon Associate we earn from qualifying purchases
Buy DVD
Information

Big Fat Gypsy Weddings, Channel 4's revealing documentary series that offers a window into the secretive, extravagant and surprising world of gypsies and travellers in Britain today is out to own on DVD on 18th April 2011 from 4DVD.

Big Fat Gypsy Weddings offers a visually arresting insight into the lives of gypsies and travellers living in Britain today. From the strict rules of courtship governing gypsy relationships; to the epic preparations for gypsy and traveller weddings, this series goes beneath the skin of the much-maligned but little-understood community to paint a fascinating picture of the modern gypsy way of life.

Appearing for the first time as a Cutting Edge documentary special, the series that followed drew record audiences for Channel 4 and is now being released for the first time on DVD, along with the one-off special that preceded it.

The new DVD offers the chance to see those shocking moment that drew so many viewers first time around. From a 14-stone, light-up wedding dress (complete with moving butterflies) to spray tans for 6 year olds; and from bare-knuckle fights to the controversial "grabbing" tradition, Big Fat Gypsy Weddings provides an insight into a world never-before documented on British TV.

Aside from the blingtastic nuptials that inspire the title, Big Fat Gypsy Weddings goes deeper; examining the prejudices that this community faces. Documented throughout the series, we learn that discrimination is nothing new to the traveller community and that their secretive seclusion from mainstream society may be their only form of defence.

Each episode stands alone and sheds light on this fascinating community's attitudes toward a range of issues including gender roles, education and their view of the non-gypsy or traveller way of life. Featuring ex bare-knuckle boxer Paddy, the patriarch of a traveller site in Salford; Liverpuddlian wedding dress-maker Thelma and the other unforgettable cast of characters, the series explores the rituals, traditions and beliefs held by this minority group, painting a remarkable picture of 21st century gypsy and traveller life in Britain.