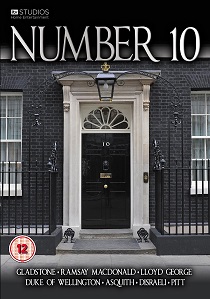 Released for the first time on DVD since its transmission in 1983, Number 10, released on 5th April 2010 by ITV Studios Home Entertainment, offers a revealing insight into the lives of the inhabitants of Britain's most famous - and infamous - address: No 10 Downing Street.

The first episode in the series takes us back to the year 1882. The door of Number 10 Downing Street is open to prostitutes and politicians, Englishmen are being murdered in broad daylight in Dublin and Prime Minister Gladstone is being tailed at night by the police as he visits the brothels of London.

In episode two, James Ramsay MacDonald, the first ever Labour Prime Minister, finds it difficult to live at Number 10 with three young daughters and no private income. An offer of financial help from an old friend turns into a political scandal. We then meet David Lloyd George, Prime Minister during the First World War. While George fights his Generals as well as the Germans, his wife Margaret and mistress Frances Stevenson are fighting their own private battle at Number 10.

Episode four welcomes the Duke of Wellington, who resided only briefly at Number 10 as Prime Minister. In spite of his enormous popularity, he incurred the wrath of the nation when he appeared to be sympathetic with Irish Catholics. Rumours surrounding his friendship with the bewitching Harriet Arbuthnot did not enhance his reputation either. In the Cabinet Room of Number 10, Herbert Henry Asquith fights to reduce the power of the Lords whilst his wife, Margot, dances in her underwear in front of his secretary in episode five. Dazzling though the Asquiths may have been socially, the marriage was considered unsuitable for a Prime Minister.

In episode six, Benjamin Disraeli, adored by Queen Victoria and master international diplomat, still finds time to entertain two beautiful and aristocratic sisters at Number 10. And all this at the grand age of 73. The series ends with William Pitt the Younger. Pitt the Elder and Pitt the Younger were both British Prime Ministers. But they had something else in common - lunacy. The younger Pitt struggles against his fate whilst trying to govern the country and court the beautiful Eleanor Eden.

BD
An intimate and moving story of childhood memories, Belfast is available to own on Blu-ray and DVD 25th April 2022 from Universal Pictures (UK). END_OF_DOCUMENT_TOKEN_TO_BE_REPLACED
Top PicksView