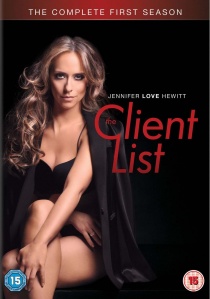 The Client List: The Complete First Season, Sony Pictures Television's break-out dramatic series based on the highly popular US original television movie, debuts on DVD 20th January 2014 from Sony Pictures Home Entertainment. The first season of this sexy series introduces us to Texas housewife Riley, played by Jennifer Love Hewitt (TV's Ghost Whisperer), as she is left by her husband and forced to take a job at a local spa. Only later does Riley realize this traditional parlor offers some special services to its clientele that could land her in jail if anyone were to find out.

The Client List: The Complete First Season contains all 10 episodes in a three-disc DVD set, as well as outtakes and deleted scenes. The Client List is created by Suzanne Martin and executive produced by Dannielle Thomas, Howard Braunstein, Jennifer Love Hewitt, Efrem Seeger and Jordan Budde.

Sexy. Seductive. Scandalous. The sensational first season of the provocative hit drama stars Jennifer Love Hewitt in her hottest role ever. Committed to supporting her family, Texas housewife Riley Parks (Hewitt) takes a job at the neighbouring town's massage spa. She's stunned to discover that her female co-workers offer 'extra' services not on the massage menu. With the support of her cunning new boss (Devine) and the love of her oft-married mother (Shepherd), Riley now leads two starkly different lives: struggling single mom and enterprising businesswoman with a scandalous secret.