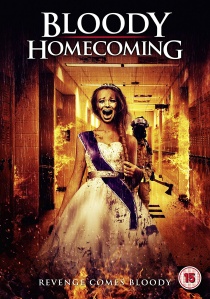 Death stalks the halls in of Winston High and for its young students Homecoming will never be the same, in brand new teen slasher Bloody Homecoming which makes its UK DVD debut from Image Entertainment on 10th March 2014.

Three years earlier Billy Corbin died trapped in a fiery storeroom. Now the ones who let him burn are attending their school homecoming party and it could be their last.

It's payback time without pity for the young, the foolish and the beautiful. One by one they disappear, each meeting a gory, terrifying end. The corridors of Winston High are dark, slippery and wet with the blood of those who came before.

It's here the screaming starts. It will end in a Bloody Homecoming.

With a cast of bright young thing and lashings of gore, this is a must see for all slasher fans.

UHD
Fast forward to the 1980s as Wonder Woman's next big screen adventure finds her facing a wide array of foes including Max Lord and The Cheetah as Wonder Woman 1984 flies in on Blu-ray and 4K UHD 22nd March 2021 from Warner ... END_OF_DOCUMENT_TOKEN_TO_BE_REPLACED
Top PicksView