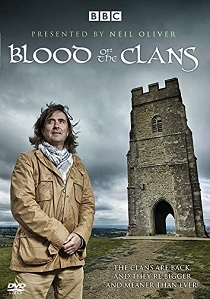 NewsTV SeriesHistory
News Article Go back to homepage
Master storyteller Neil Oliver leads us through one of the most explosive periods in British history with Blood of the Clans, released on DVD 12th October 2020 from Dazzler Media.
Neil Oliver
Craig Collinson
Dazzler Media
3 hours 0 minutes
12/10/2020
#BloodOfTheClans
Thank you for supporting DVD365.net when you order using the link(s) below. As an Amazon Associate we earn from qualifying purchases
Buy DVD
Information

In this thrilling sequel to Rise of the Clans, the clans are back. And they re bigger and meaner than ever. From the fall of the Stuart kings to the rise of Bonnie Prince Charlie, this series journeys through one of the most explosive periods in British history.

The clans still clashing with each other face brutal civil war, dirty double-dealing from the legendary Rob Roy MacGregor, and a doom-laden challenge from a new king. Blood and betrayal are around every corner. Can the clans survive?

Master storyteller Neil Oliver leads us through one of the most explosive periods in British history the Jacobite era. Going into the thick of the action he uncovers what happened to the formidable Scottish clans during the power struggles of the 17th and 18th centuries.

From the Massacre of Glencoe to the Battle of Culloden, discover key moments in Scottish history. Learn the real story of iconic figures including double - dealing Rob Roy MacGregor, and Bonnie Prince Charlie. And find out if these formidable clans survive the attempts to topple them.

Blood of the Clans is released on DVD 12th October 2020 from Dazzler Media.

UHD
Doctor Strange teams up with a mysterious teenage girl from his dreams who can travel across multiverses in Doctor Strange in the Multiverse of Madness, released on DVD, Blu-ray and 4K UHD 18th July 2022 from ... END_OF_DOCUMENT_TOKEN_TO_BE_REPLACED
Top PicksView