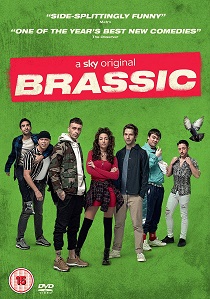 Set in Lancashire, Brassic follows a group of Northern working-class friends, managing to live life somewhat on pure luck and schemes of questionable legality. Vinnie (Gilgun) - who suffers from bipolar disorder - and best friend Dylan (Molony) have been inseparable since childhood, but that could all change when Dylan's girlfriend Erin (Keegan) reveals plans to leave town to start a new life with him and son Tyler. Dylan must decide whether to make a fresh start with the woman he loves or stay behind with Vinnie and his gang of unscrupulous best mates.

Best mates Vinnie, Dylan, Ashley, Cardi, Tommo and JJ have dealt, scammed, and laughed their way through three decades of friendship. And these days their schemes have only become more creative. Whether it be stealing tiny horses, breaking into a local pimp's safe or raiding a rival grower's weed farm, these lads think they can get away with just about anything. But their luck runs out when they inadvertently step into the path of criminal heavy-weight Terence McCann and learn a tough lesson about what happens when you accidentally steal something precious from a merciless sociopath.

DVD
In Your Honor, released on DVD 31st May 2021 from Paramount Home Entertainment, Bryan Cranston stars as a New Orleans judge who is forced to confront his own deepest convictions when his son is ... END_OF_DOCUMENT_TOKEN_TO_BE_REPLACED
Top PicksView