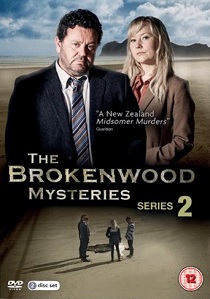 The mystifying murder of a local farmer brings in the services of maverick Detective Inspector Mike Shepherd who arrives from the big smoke. With a reputation for solving the most difficult of crimes, his unconventional methods (and passion for country music) leave his by-the-book new colleague Detective Kristin Sims aghast.

But with inexplicable wine festival drownings and puzzling stag-do shootings to solve, and territorial fishermen and tree-huggers to contend with, this unlikely duo need to put their differences aside for the sake of the community.

Murder lurks in the most unlikely of places in The Brokenwood Mysteries.

DVD
The end of the line is only the beginning in a wild, non-stop thrill ride through modern-day Japan as Bullet Train is released on DVD, Blu-ray and 4K UHD 24th October 2022 from Sony Pictures Home Entertainment END_OF_DOCUMENT_TOKEN_TO_BE_REPLACED
Top PicksView