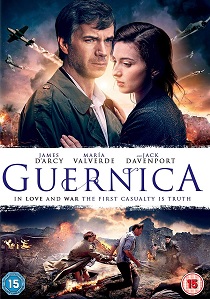 1937 Spain: lines are being drawn, sides are being chosen... and the world will never be the same. As the citizens of the village of Guernica live with the day-to-day realities of the Civil War, an American journalist (James D'Arcy) secretly joins forces with a local press-office censor (María Valverde) to work against the stringent restrictions that are becoming more common. But everything changes when German forces attack the town, and the freedom of the press becomes a vital weapon. Based on the historical events of the bombing that set the stage for World War II.

Related Articles
Next of Kin, Kingsman: The Secret Service, Smash: Season 1, FlashForward: The Complete Series, Pirates of the Caribbean: At World's End, Coupling: The Complete First Series, Pirates of the Caribbean: The Curse of the Black Pearl, The Talented Mr. Ripley
Imperium, And Then There Were None, Pacific Rim, Spies of Warsaw, Torchwood: Miracle Day
The Backwoods
Comments
UHD Releases News Pick

UHD
In Disney's Mulan, released on DVD, Blu-ray and 4K UHD 10th November 2020, a fearless young woman risks everything out of love for her family and her country to become one of the greatest warriors China has ever known. END_OF_DOCUMENT_TOKEN_TO_BE_REPLACED
Top PicksView