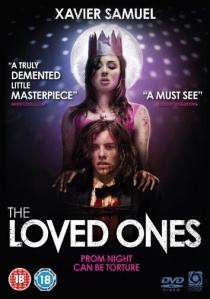 Finding a date can be torture.

After a freak car accident, high school student Brent Mitchell's (Xavier Samuel, Twilight: Eclipse) flame goes out. He was behind the wheel when a random figure ran into the road and there was nowhere to turn. The car ended up around a tree and his father ended up dead. His home, now reduced to just him and his mother, is a muted shell filled with grief and silent despair.

The only bright point of his life at all is Holly (Georgina Haig), his beautiful and vibrant girlfriend. The only soul with a chance of pulling him out of his self imposed exile, Holly is, of course, his date for the school prom. But there's another girl who yearns to comfort Brent, Lola (Robin McLeavy), the quietest girl in school. When he politely turns down her offer of a date to the prom, that refusal turns out to be the biggest mistake he ever made. For Brent will now be attending a macabre, alternative Prom; a sick creation from the twisted minds of Lola and her father (John Brumpton). A terrifying series of events take place involving pink satin, glitter, syringes, nails and power drills; all under a mirrored disco ball with Brent as the centrepiece.

3D-BD
The surviving members of the resistance face the First Order once again, and the legendary conflict between the Jedi and the Sith reaches its peak as Star Wars: The Rise of Skywalker is released on ... END_OF_DOCUMENT_TOKEN_TO_BE_REPLACED
Top PicksView